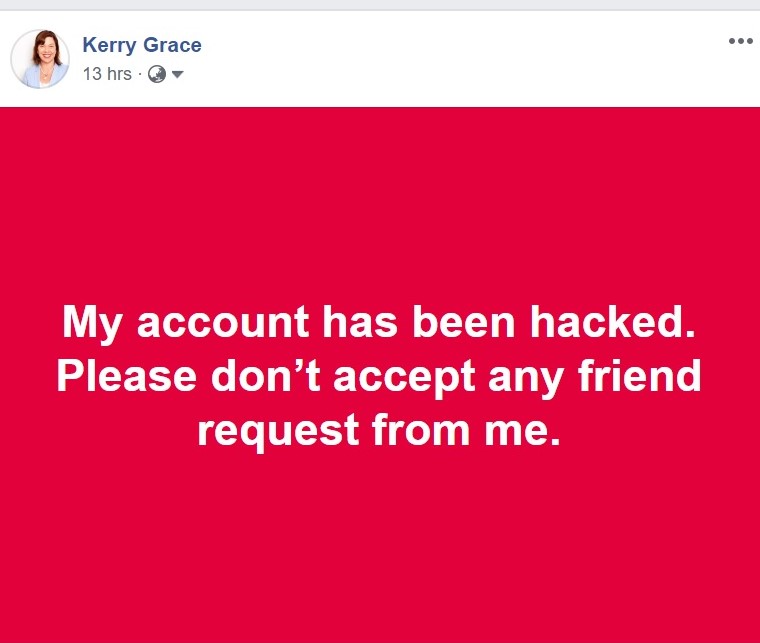 Late in September 2018 Facebook released information that around 50 Million accounts had been hacked in a major security breach.

According to Facebook it was a no big deal, nothing to see here kind of event. Around 90 Million users were logged out of their accounts and had to log back in. Did any major dramas occur as a result? Facebook says… Ah.. dunno. If you want to read more about this you can here.

I noticed when I went to log back into my account there was a new profile option on my mobile device that I hadn’t seen before. I deleted it and continued on my merry way.

Then, just this week I started to receive messages in Messenger to the tune of this… “Hi… I actually got another friend request from you yesterday…” I checked in with a reliable source to find out if a duplicate request had in fact been received from me, it had.

In response to this I searched for my name in Facebook, scrolled through the fifty or so duplicate names, fought back the crushing feeling of being ‘just another Kerry Grace in a sea of many’ and found a profile with duplicate friends. Sure enough, this profile had copied bits of my profile and even some posts. This cloned profile didn’t appear  funnier, wittier nor smarter than I, however in the name of maintaining my own identity (god knows how difficult that is) I reported it to Facebook. As a safe guard I told the fifteen people that see my account on a daily basis that I’d been “hacked”, knowing full well that hacked I was not, I was in fact cloned. But everyone is entitled to just a little bit of drama on a Monday afternoon right? (just nod).

Interestingly, turns out that the above mentioned message was in fact a delicious scam message about a scam.  Want to know more about that? You can learn more here

The real scams, I think are the ones we should be much more wary of.

And who could go without the

Facebook can be a great source of inspiration, affirmation and information but there is a lot of crap to sift through. If your ‘feed’ isn’t doing it for you it’s time for some curating. How? Simply unfollow the ‘friends’ that make you feel like crap and follow, like and comment on the ones that lift you up.

And as a golden rule don’t COPY and PASTE, be wary of what you’re sharing, saying Amen to and probably don’t send money off to people you wouldn’t bother giving cash to on the street.

As for the scam? I’m using it to my advantage. Now teen has her own Facebook profile and has become just a little wary of what mother posts, I’m telling her it was a cloned account.

All problems were solved.